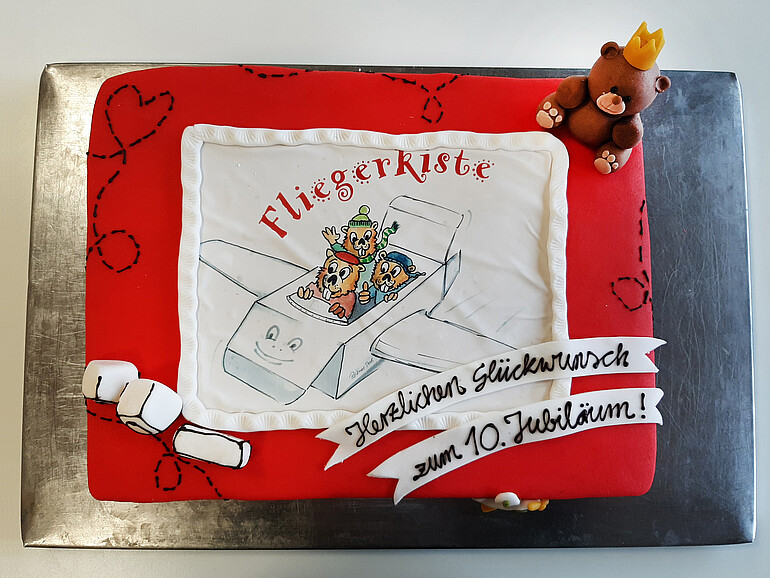 HYDRO Systems KG, Karl Knauer KG and the municipality of Biberach look back on ten successful years of the Fliegerkiste daycare centre for children. Five years ago, celebrations were still able to take place on a large scale, including all children and their families – such a gathering was sadly not possible this year. Instead, the Fliegerkiste organised a great birthday week of different activities for the children to celebrate this special anniversary.

The birthday week began last Monday with a plentiful breakfast and a puppet show. Perfect in time for Easter, the children also received a surprise treat in the form of home-baked bunny pastries. As part of a craft activity, children made footprints, which were then transformed into little beavers and now hang in the entrance area as mementos. The birthday week continued with fun developmental games for the older children while the little ones went in search of treasure as “gold diggers”. More craft activities and a visit from the magician “Findibus” concluded the week of celebrations.

“I can still remember the early days very clearly. How quickly these ten years have flown by! We would like to thank everyone involved for their support, their trust and the wonderful time we have had so far,” says Fliegerkiste manager Edeltraud Seiler, reflecting on the past years.

Speaking on behalf of the three parties involved, Stefanie Wieckenberg, managing director at Karl Knauer KG shares, “We are so proud of this project. We take our responsibility for the people who work for us and for the region seriously. It’s important to us to focus on continuity and ongoing further development but also on creativity, social commitment and cross-company cooperation. This unique pilot project brings everything together.”

About the Fliegerkiste
The Fliegerkiste daycare centre was established in 2011 and is, according to the regional council, a unique joint project, the first of its kind nationwide to be put into practice through collaboration between industry and local authority. The Fliegerkiste was founded by the two family-owned companies HYDRO Systems KG and Karl Knauer KG from Biberach/Baden and the municipality of Biberach. The three partners have set themselves the task of supporting young families in the region and improving the compatibility of families and careers on a sustainable basis.

The daycare centre started out with four children and two educators and currently has 56 youngsters and twelve team members. The Fliegerkiste has been committed to the idea that “childcare facilities with an educational responsibility must become educational facilities with a responsibility for childcare” from the outset and so also provides a high standard of language development support, social interaction and education.